Anyone who knows me well, knows that I am a huge advocate for animals. I love the idea of teaching every child to admire, respect and cherish animals so that they grow into future adults that would pass along the same message…. I strongly believe that it is our responsibility to always be a voice for the voiceless. So this year’s Christmas ornaments include a few of my favorite animals, which I am really hoping to develop into an entirely new ornament line specifically dedicated to animals. I have added a few of my favorites to start and I will really try to add photos as I design them. Trying to be more organized this year, (we’ll see if I can actually be). Wish me luck on that. And of course, you have to have a few snowmen!

I recently “liked” PETA on Facebook. It is a fantastic organization and I am a huge fan of theirs. I’ve heard on several occasions when I mention something that I read or saw,  ” PETA is so extreme.”, umm… yes, they’re extreme because I think it’s so much easier for everyone to just not want to see what PETA knows. Because if most people were to really allow themselves to think about how most of the world treats animals, then that may require change and change is hard.

I have to say, the more I read and see, the sadder I am becoming that things are very rarely improving for the well being of so many animals. I don’t understand why animals seem to have no rights and so often very little respect. PETA has to fight so hard on behalf of them constantly. I guess I naively assumed that others thought the way I do. If for example, an elephant can be tortured and trained to perform on command at a circus, then obviously animals are fully capable of emotion and yet animals are captured, abused and neglected every day as though they are not alive and feel nothing? They are not “ours” to take.

I guess I could justify the humane killing of animals for human survival, but here in the US that is not the case. We do not need to hunt? And really if we were to consider this a sport, then take away the gun and invite the deer to play. I doubt they would.

For more information, join or follow PETA on Twitter or Facebook, you may be shocked at what they know. The videos that they have captured and share may make you think a lot harder about your choices as a human being and consumer. For me, my art is all about teaching children to be aware of animals and to always respect them and treat them with kindness.  No more circus paintings for me.

Sometimes I really think we as humans are earth’s biggest threat.

It’s finally complete and clean enough to actually take pictures, which is totally rare because I can destroy this space in about 5 minutes.

I love being next to a bright sunny window to work, what a huge difference…..

And I have a total weakness for fresh flowers! They always seem to cheer me up no matter what is going on that day. I think every mom that is kind enough to grocery shop, cook meals etc….deserves to treat themselves to a few fresh flowers every week.

I just received my original artwork back from Somerset Studios and wanted to share the close up here. I was super excited to have the opportunity to be included among so many talented artists!

This one is called “Balance is Tricky”…….

And this one is “The Juggling Act”……

And my very favorite…”For The Love of Bears”…… Thank You Stampington & Company for featuring my artwork in your beautiful March 2014 issue!!! I am thrilled to be included in this gorgeous magazine featuring amazing artwork and creative ideas!!!

Be sure to check it out if you haven’t yet! 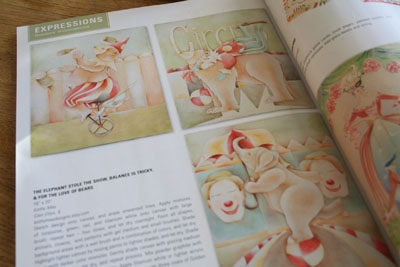 More fun with polka dot paintings! I am loving the combination of gray and brown for nursery decor. It’s a color combination that not only looks beautiful, but can be used for both boys and girls to create a beautiful nursery that can be enjoyed for many years to come! Plus these lightweight canvasses are completely nerf-ball proof , which is super important in my house.

Here’s a new one that I just finished after our visit to the zoo. Each animal is so uniquely beautiful in their own way. I love creating children’s art that hopefully will inspire the same feelings in children to love and respect these beautiful animals. Wishing you a great weekend!!!!

Whenever I can, I love to head to the zoo for a little animal inspiration. We recently had a gorgeous day here in Chicago so we made a quick visit before the snow hits.

Be sure to do something that you love as often as you can, it feels so good to just relax and enjoy a beautiful day once in a while.

This is the Chicago skyline from Lincoln Park Zoo, beautiful! 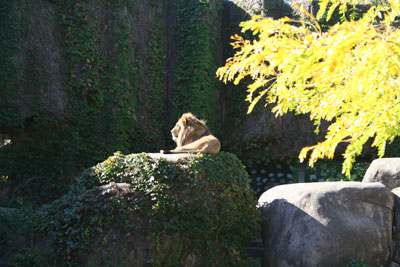 We had a wonderful get a away weekend spending time with great friends, shopping, eating (too much) and watching the runners of the Chicago Marathon.

I recently took my camera in for some tweaking and was able to get some great photos of the event as well as some beautiful photos from our zoo visit later in the day.

I love spending time down in the city! There is always so much to do and the people are all so friendly and helpful. Being a rooky, the learning curve can be steep at times but there is always a welcoming Chicagoan to help you out if you get completely lost as I tend to do. Congrats to all of the Marathon heros that finished, great job! I had to share this video of two wonderful people that braved the rain to save this poor pregnant, abandoned dog and her unborn puppies.

They restore your faith in humanity with their gentle kindness.